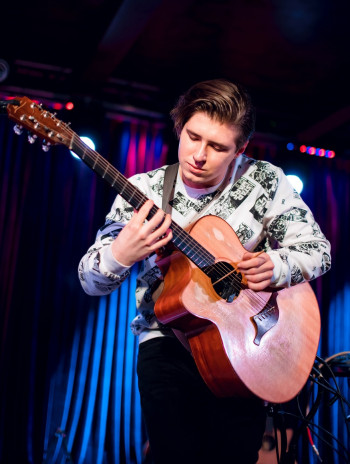 Due to the ongoing critical political situation and related uncertainties, the concert of Alexandr Misko in Dedemsvaart has to be postponed from the Thu., 19.05.2022 to the Sun., 01.10.2023. Tickets already purchased remain valid. We kindly ask for your understanding and look forward to the postponed date.

Alexandr Misko is a dazzling new breed of modern fingerstyle guitarist. Drawing influences from the musicians who pioneered and expanded this guitar style, Misko manages to break through to new heights while never losing sight of the underlying music. He is a passionate and energetic performer who plays concerts all over the world and has released five solo albums. With an organic approach, Misko’s work has been viewed over 200 million times on video platforms and has amassed more than 1 million followers of his music.

Alexandr's musical story is amazing and simple at the same time. He started playing the instrument at the age of 12 doing classical guitar with a private teacher for 3 years. After becoming acquainted with the modern style of guitar playing called “Fingerstyle” on the Internet, he began to learn it on his own.

A unique style, a very musical and technical presentation, coupled with original works, make Alexandr’s music accessible to any listener. The language of his music is universal and understandable for audiences anywhere in the world.

“Alexandr Misko is the future of acoustic guitar. People have watched my generation play and said "That's it, that's the limit, nobody can take the guitar any further." But that would be a tragedy to me. The moment I first saw Alexandr my heart filled up with relief and joy, as I saw that they had been wrong”